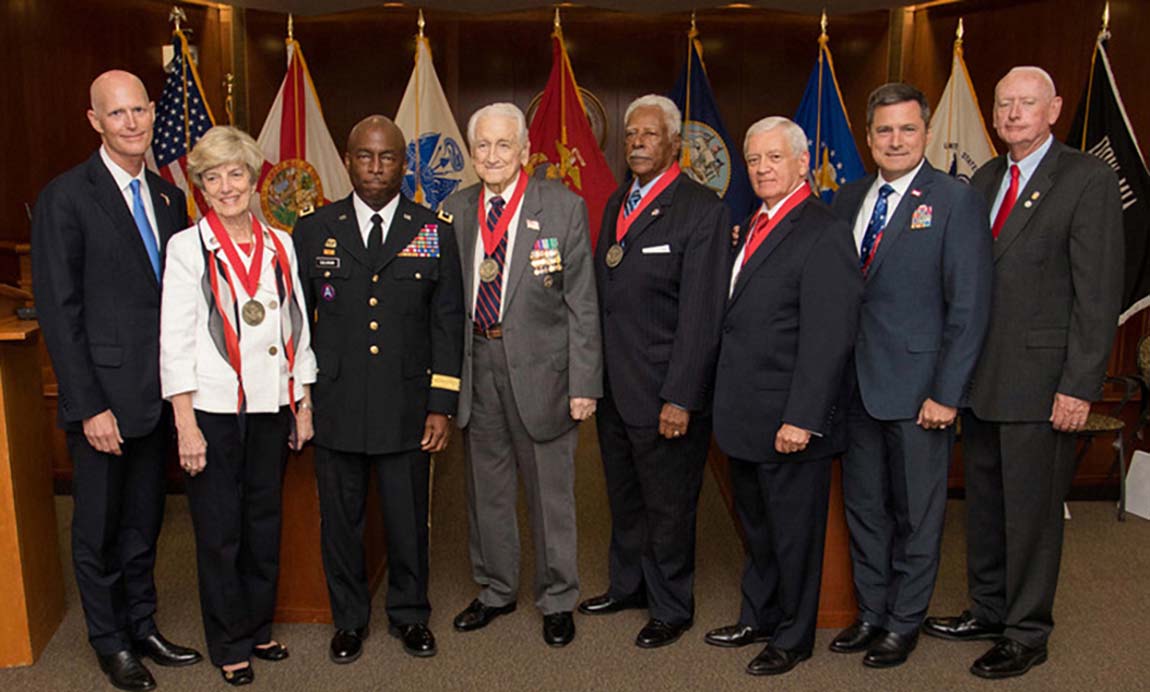 Scroll back to top

Rick Scott, Governor of Florida
Mrs. Jane Collins, representing the late Rear Admiral LeRoy Collins Jr.: The late Rear Adm. LeRoy Collins Jr. was a 1956 U.S. Naval Academy graduate. He was a Navy pilot and submariner who spent 10 years on active duty before joining the Navy Reserve. An active civic leader and business entrepreneur, he was appointed in 2007 by Gov. Charlie Crist as executive director of the Florida Department of Veterans’ Affairs. A champion for veterans, he created the Florida Veterans Foundation to honor and care for those in need.

Lieutenant General Lawrence F. Snowden: Lawrence Snowden is a retired U.S. Marine Corps Lieutenant General and senior ranking survivor of the Battle of Iwo Jima in 1945. A civic leader and past chairman of The Economic Club of Florida, he was instrumental in establishing the Florida Department of Elder Affairs. In 2015, he was recognized during a joint session of Congress by Japanese Prime Minister Shinzo Abe for his efforts to strengthen the friendship between Japan and the United States.

Chief Master Sergeant Eugene Cecil Johnson: Eugene Johnson spent 31 years in the U.S. Air Force, retiring in 1982 as a Chief Master Sergeant, the service’s highest enlisted rank. A champion of civil rights and equal opportunity both in and out of uniform, he is a distinguished community leader and higher education advocate. He advises numerous non-profit and faith-based organizations on veterans’ issues and holds top community service honors from several Florida colleges and institutes.

Dr. Harry Frank Farmer Jr.: Dr. Farmer served in the U.S. Army, Florida National Guard and U.S. Air Force before his retirement as a Colonel in 2004. A Vietnam veteran and former professor of history, Farmer became a physician in 1976 and served as president of the Florida Medical Association, chairman of the Florida Board of Medicine, and from 2011-2012 as Surgeon General and Secretary of Health for the State of Florida.